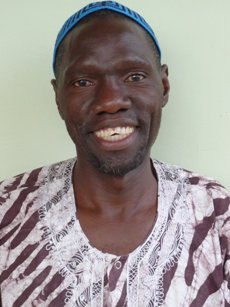 JJ Keki. Photo by Lorne Mallin.NEW YORK, NY, OCT 19â€“ JJ Keki, a leader of the Abayudaya Jewish community in Mbale, Uganda, will be visiting New York City and surrounding communities as part of a North American speaking tour sponsored by U.S.-based Kulanu, Inc., a grassroots, not-for-profit Jewish organization supporting isolated and emerging Jewish communities worldwide. Mr. Keki will be in this area from October 24 through October 31 and again on November 23. (See below for complete schedule of speaking engagements)

In his presentation, JJ Keki will be sharing the story of the 1000-member Abayudaya community established in 1919 and its struggle to maintain its Jewish identity in Uganda in the face of persecution and intolerance, particularly during the regime of Ugandan dictator Idi Amin. In addition he will describe the extraordinary progress the community has made and its leadership role in creating an oasis of cooperation and good will among its Christian and Muslim neighbors. Mr. Keki, a renowned musician, will also perform several songs composed by him and other members of his community.

The story of the Abayudaya and its embrace of Judaism without any personal contact or connection to Jewish communities elsewhere is a unique story, which continues to fascinate. In recent years, as a result of chance visitors and help from Kulanu, the community has created a strong and vital Jewish community presence in Uganda. Mr. Keki will describe the spiritual journey of his community as well as the projects that have improved the quality of life for his people as well as for his neighbors.

One of the communityâ€™s most well-known and highly regarded Abayudaya-Kulanu development projects is the â€œDelicious Peaceâ€/Mirembe Kawomera fair trade organic coffee program, which was created by Mr. Keki and Laura Wetzler, Kulanuâ€™s coordinator for Uganda. The program has brought together approximately 1,000 Jewish, Christian and Muslim farmers in a cooperative to produce fair-trade certified coffee. The coffee coop, Kulanu, and Thanksgiving Coffee Company were awarded the prestigious Dr. Jean Mayer Award from the Tufts University Institute for Global Leadership in 2008.

In addition, Mr. Keki will update audiences on the Kulanu-supported Abayudaya primary and secondary schools, which educate and feed some 700 Jewish, Muslim and Christian children, studying together in peace. Other Abayudaya-Kulanu programs include a school nutrition project, health education and womenâ€™s empowerment programs, micro-finance, eco-tourism, and more.

Kulanu has been working side-by-side with the leaders of the Abayudaya Jewish community for 14 years. In 2005, Kulanu helped the largest Abayudaya village receive electricity when it joined Ugandaâ€™s national electricity grid. In 2007, it helped the community drill its first water well at their school.

Kulanu (â€œAll of Usâ€ in Hebrew), founded in 1994, supports isolated and emerging Jewish communities around the world, many of whom have long been disconnected from the worldwide Jewish community. Kulanu raises awareness and support for these communities through education, research, and publications about their histories and traditions. Kulanu works with communities in Africa, Asia, Europe, and North and South America.