For about 20 years, a new Jewish community has been developing in Abidjan, Côte d’Ivoire (Ivory Coast), a tropical country in western sub-Saharan Africa.

History of the Community

The community began fifty years ago as one of a number of International Kabbalah Centers and study groups that were seeded throughout Africa. The center was open to the public; every one of every faith and belief was welcome to learn Kabbalah and meditative techniques that would improve the quality of life for the practitioners. The study of Kabbalistic texts promised to make people more aware, calmer, and better able to cope with the daily stressors of their lives.

In Abidjan, a group of practitioners, led by Alexandre Zouko, came to believe that to practice Kabbalah in the right way, one had to practice Judaism. Under Alexandre’s guidance, they studied Hebrew, learned how to pray, and celebrated Jewish holidays. Some traveled to Israel to study with renowned Kabbalists and, despite some conflicts within the group, founded a community of practicing Jews in Abidjan.

It was Alexandre who originally got in touch with Kulanu. While some are poor and struggling, for the most part, unlike other groups of African Jews, members of the community are middle-class. Many have college degrees and are professionals and academics.

My husband, Rabbi Gerald Sussman, and I visited this community in 2014 as volunteers. We were privileged to bring them a Sefer Torah that was donated to Kulanu. We also added books of Jewish learning to their library of siddurim, machzorim, and other books of higher learning. 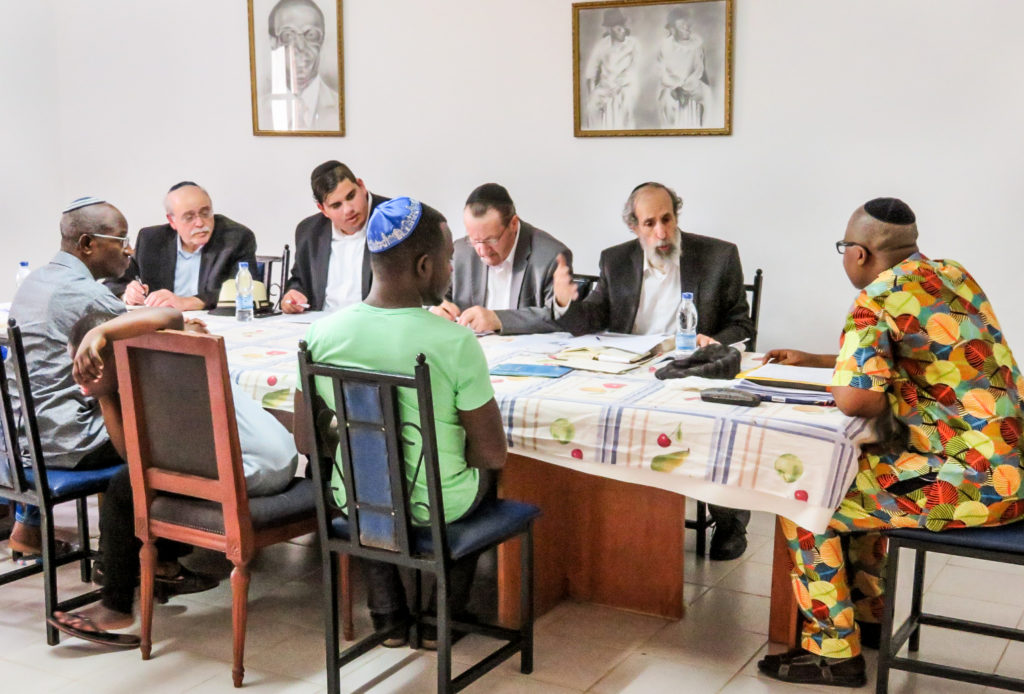 In December 2017, we again traveled to Côte d’Ivoire, this time with an Orthodox Beit Din (rabbinic court, necessary for conversion) which included three rabbis from The Rabbinical Court for the Diaspora of Israel, a group of independent rabbis which supports Kulanu’s mission. In addition to Alexandre’s congregation, among the 48 conversion candidates was a group called Etz Chaim who follow Sephardic practices, led by Abraham Yago. All of the candidates had been studying Judaism for years, and last summer benefitted from the visit of a rabbinical student, Eliyahu Friedman, who taught in Abidjan for a month through the Kulanu Global Teaching Fellows program.

The conversion process began with the candidates filling in questionnaires documenting their journeys to Judaism, including the impact on their families, and answering questions about holidays, life cycle events, and beliefs. A YouTube video shows Professor Marla Brettschneider, who accompanied us to Côte d’Ivoire, and myself reading some of the evocative answers: bit.ly/cdi-answers

Candidates, separately or as a family group, met with the rabbis of the Beit Din who questioned them, looking for sincerity, knowledge, and commitment. The male candidates for conversion, who were already circumcised – a common practice in Africa – underwent hatafat dam brit, drawing a drop of blood as a symbolic circumcision. A rabbi of the Beit Din performed the first one on a leader of the community. After his conversion, the Beit Din trained the leader to perform this holy act on the other men in his community.

At the end of the conversion process, men and women immersed in the mikveh, the ritual bath.

After several women had undergone the ritual immersion under the eye of a Kulanu representative, they were trained to oversee immersions of other women as “mikveh ladies.” To see a video of the women singing Adon Olam after the mikveh ritual in a natural body of water, go to bit.ly/cdi-adon-olam

All over the world, communities are emerging that long to convert to Judaism and become part of the Jewish people. They come to Judaism for many reasons: some claim that they descend from Lost Tribes or consider themselves Children of the Inquisition. Others come from rejection of Christianity and its association with imperialism, while others relate to the Jewish experience of persecution and the concept of redemption as seen in the State of Israel. Their members live Jewish lives and make many sacrifices to be Jews, often at a financial loss (since they do not work on Shabbat), and are often rejected by family and friends. Kulanu is proud of the work we do with these communities and now welcomes the Jewish community of Côte d’Ivoire. To learn more about Kulanu’s work in Côte d’Ivoire and view more photos and videos, visit kulanu.org/cote-divoire