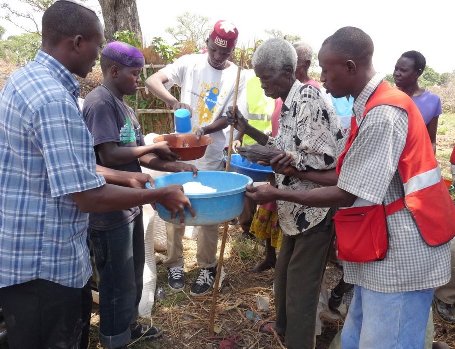 The Ugandan government says there are food shortages in 52 districts in the north and east brought on by drought and other factors. Nearly 40 people have died so far of hunger-related complications in the East African nation of about 32 million.

Rabbi Gershom Sizomu said here today he wanted to act before those numbers got worse.

“Central to our Jewish values is saving lives,” Rabbi Sizomu told the 65 families sitting on the ground in the shade of a large tree next to mud-hut homes with thatched roofs in this remote village in northeastern Uganda. “We wish you well and we pray that God brings this to an end.”

He was speaking in response to a village elder who thanked the Abayudaya for coming “and for rescuing us.” Acegerekinei is in Katakwi, one of 17 hardest-hit districts that the government says are experiencing famine.

The villagers all clutched cards from the Ugandan Red Cross, which is helping coordinate relief, entitling them to a share of the corn flour and beans that the Abayudaya trucked four hours north from their home in Mbale district near the Kenyan border. The Abayudaya first embraced Judaism in the 1920s and now include about 1,000 members in several villages.

The Red Cross chose the most vulnerable in Acegerekinei to receive relief â€“ the elderly, the disabled and those suffering from HIV/AIDS. They lined up as best they could, some in wheelchairs fashioned out of plastic lawn chairs.

Each family received about 33 lbs. (15 kg) of corn flour to make corn porridge and the staple dish called posho, plus about 3.3 pounds (1.5 kg) of beans.

â€œOur community responded overwhelmingly to the call to donate,â€ Rabbi Sizomu said. â€œEverybody wanted to help.â€ The response was considerable from a community that in large part lives on subsistence farming. Mbale district has less rain than normal but crops are still growing.

â€œI believe that life takes precedence over everything,â€ he said. â€œGod is not going to stretch out His hand physically, so we are extensions of God’s arm.â€

The rabbi’s son Igaal, 15, helped distribute the food. â€œIt felt good to donate,â€ he said. â€œIf we get hungry, maybe there would be others who would help us.â€

To contribute to the food relief, donate at cyan.olm.net/~kulanu/donate, through the website of Kulanu, Inc., a US nonprofit that supports development in the Abayudaya community (see kulanu.org/abayudaya). When you donate, please write “Uganda Emergency Fund” in the comments field.